NO ME ENCUENTRO BIEN

Years ago, when I was first learning Spanish, I took a phone call from the school where my then 5 & 8 year old children attended. The school secretary said ‘A Jessica no le encuentra bien’ . Now, I knew that the verb ENCONTRAR meant ‘to find’…. so I thought they’d lost my daughter!! Then he said ‘tiene fiebre’ & I stopped panicking!! …..we went to collect her.

ENCONTRAR – means to meet or to find – but there’s a ‘reflexive’ version – ENCONTRARSE – reflexive verbs are best described as something you do to yourself – so what the secretary was really saying was ‘Jessica doesn’t find herself well’ – she didn’t feel well! 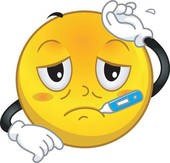 More about reflexive verbs another time – but here’s some useful vocabulary & phrases for going to the doctor or farmacia. Remember that pharmacists in Spain can often prescribe for simple ailments, do blood & urine tests, check your blood pressure & cholesterol among other things. If they feel that whatever ails you is beyond their remit the will send you to the doctor, of course.

¿Qué te pasa?  ¿Qué te duele? The doctor or pharmacist might ask you either of these – what’s wrong? where does it hurt? A friend might say Tienes mala cara… literally ‘you have a bad face’ – you don’t look well!

If you just don’t feel too good, you would say No me encuentro bien – I don’t feel well; if you have a headache, say Me duele la cabeza, or you have a sore throat – tengo dolor de la garganta. If you have a cold, say tengo un resfriado. Tengo fiebre – I have a fever.

Estoy regular might mean that you are ‘regular’ (not estreñido ).. but it also means that you feel OK; Estoy fatal doesn’t mean that you’re dead nor dying, but maybe you feel that bad! A visit to the dentist might make you feel nervioso (nervous), or maybe you would say tengo miedo … I’m scared. Or perhaps you might be mareado – dizzy.

It’s summer, & there are lots flying bugs around – if you get a mozzie bite, or are stung by something else, you might say me pica, which could mean that it itches….and you might also say it if you eat something spicy (think picante).

Something you won’t be saying at this time of year is tengo frío – I’m cold, though you’ll hear a lot of people saying tengo calor – I’m hot! 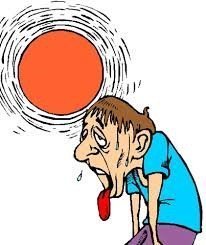 He’d probably be saying tengo mucho sed – I’m very thirsty! If he was hungry it would be tengo hambre!

So what might you be given for your ailments? For a sore throat you’ll probably have some kind of pastilla – yes that’s pastille, if you’re constipada you might be asked if you would like tabletas, comprimidos, or ‘espray’ ­- that’s tablets….and they really do say ‘espray’ for ‘spray’…… although they spell it as we do.

For anyone coming to Spain for a long holiday & needing regular medication it’s now possible to get a special prescription for use in other EU countries. As of last October 2013, you have been able to ask your usual doctor for a cross-border prescription which can be presented at a farmacia in Spain. They will ask for ID so make sure that you have your EHIC & passport with you.

For a bit of fun I thought you might like to label this body! All of the names of various body parts are below…but in no particular order – some might seem obvious – but some are nothing like you’d expect!